A workshop at MuDA by Fragment.in

A pink box at a traffic light pole that claims to be a poet?

“Toni the urban poet” is a project on participative poetry driven by a pink box which invites the passersby to stop by opening up and revealing a set of three buttons. Each button corresponds to a different mood (calm, stressed, intrigued) which influences a piece of poetry displayed inside the MuDA.

Technically, an algorithm based on probabilistic Context Free Grammars (CFG) generates poetry, which is then parsed via sentiment analysis in order to match the average mood of those who interacted with the box.

A smart city is a place full of buttons and sensors accomplishing efficient tasks which most of the time are not poetic. Would someone in the street stop and push a button to help a machine generate random art instead?

Any artist is influenced by their surroundings: Toni the urban poet from Toni-Areal highlights this in a shiny pink color! 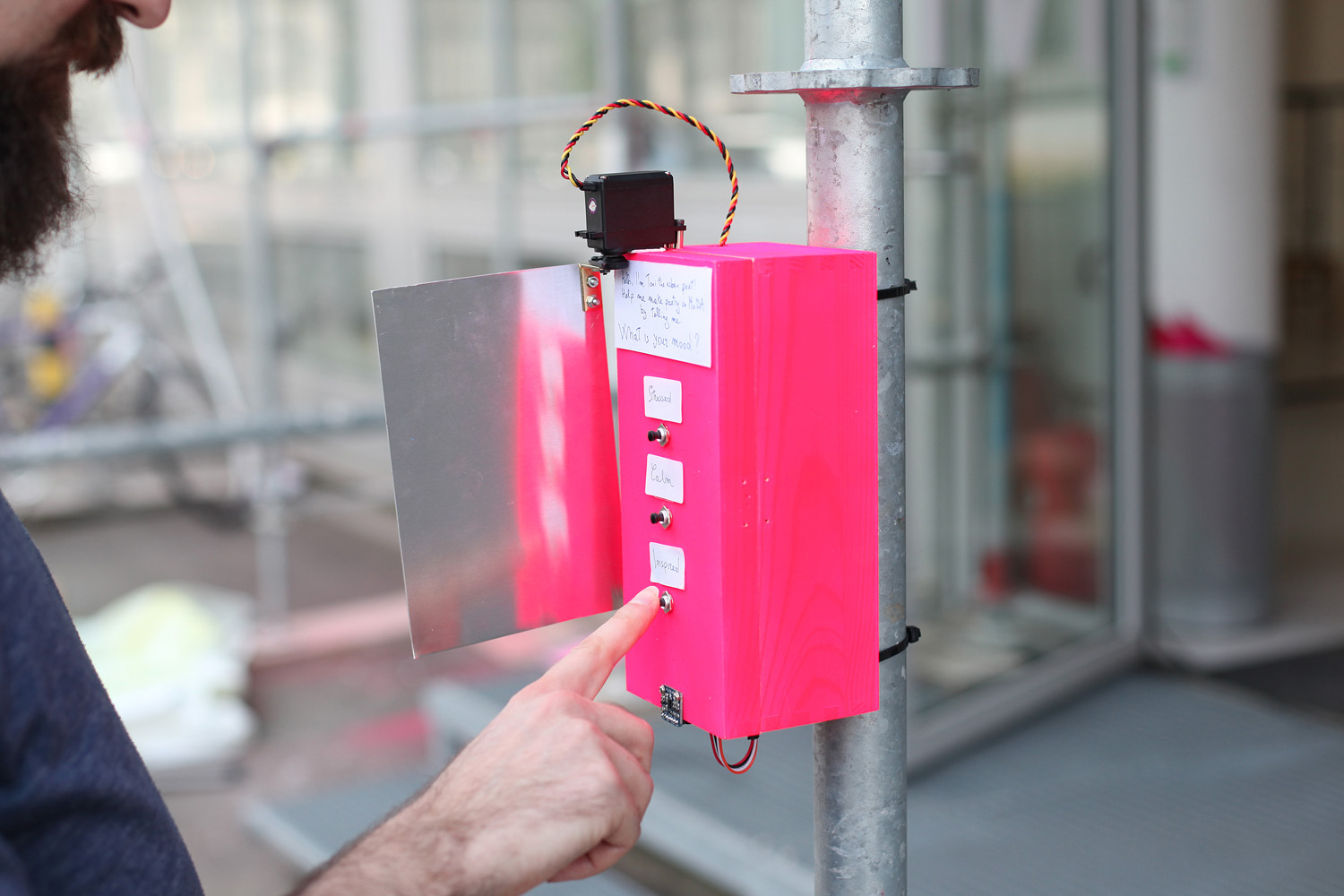 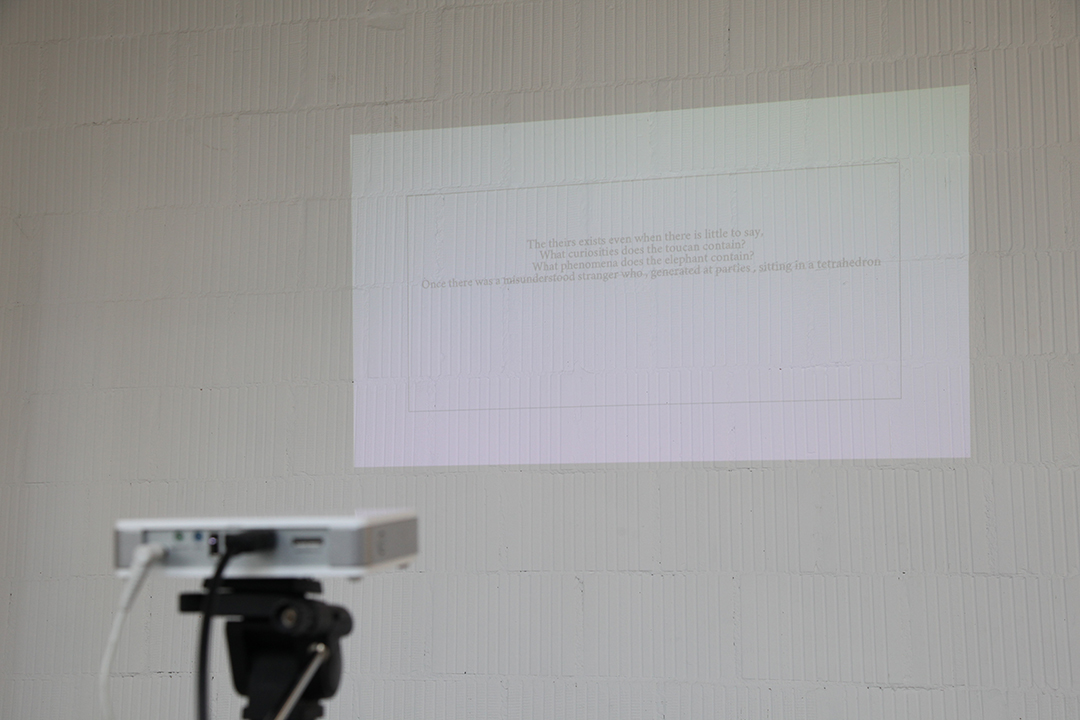 How fast could door-to-door commuting inside the city get?

A new way to travel without a ticket though a random series of fictional elements interrupting the rationality of daily city life. A try-out related to the controlled or accidental impossibilities of the smart urban environment.

This project was installed in a half public / half private lift. When the door closes, it hits a micro switch which randomly triggers one of the 20 sounds created by the artist that is displayed on small speakers suspended in the lift. The fictional narratives help teletransport the user into different unknown places.

The random selection of sound is generated by a computer programme but could have also been linked to climatic elements such as the level of humidity.

The project is part of the “Metaphorai” transdisciplinary project. 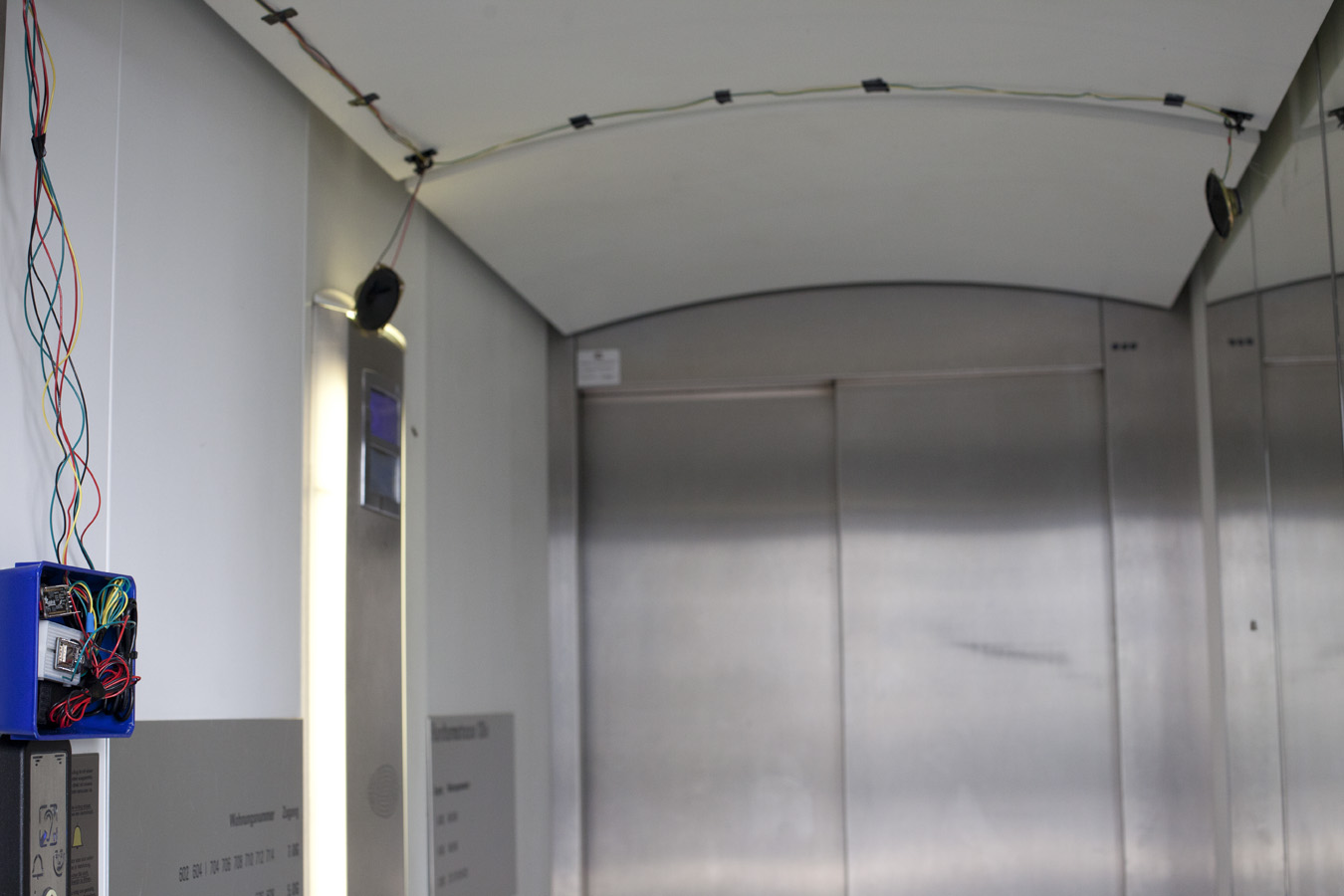 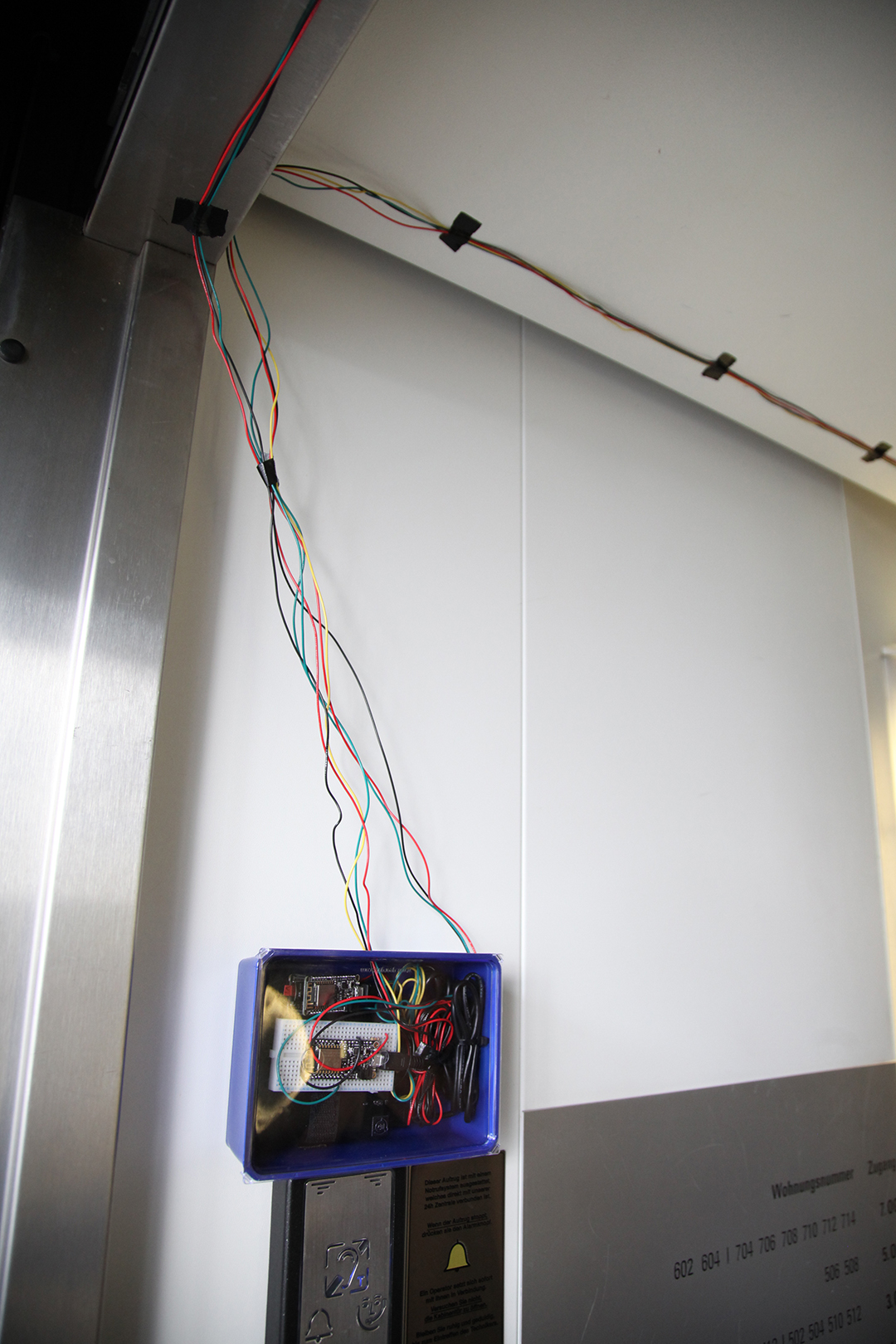 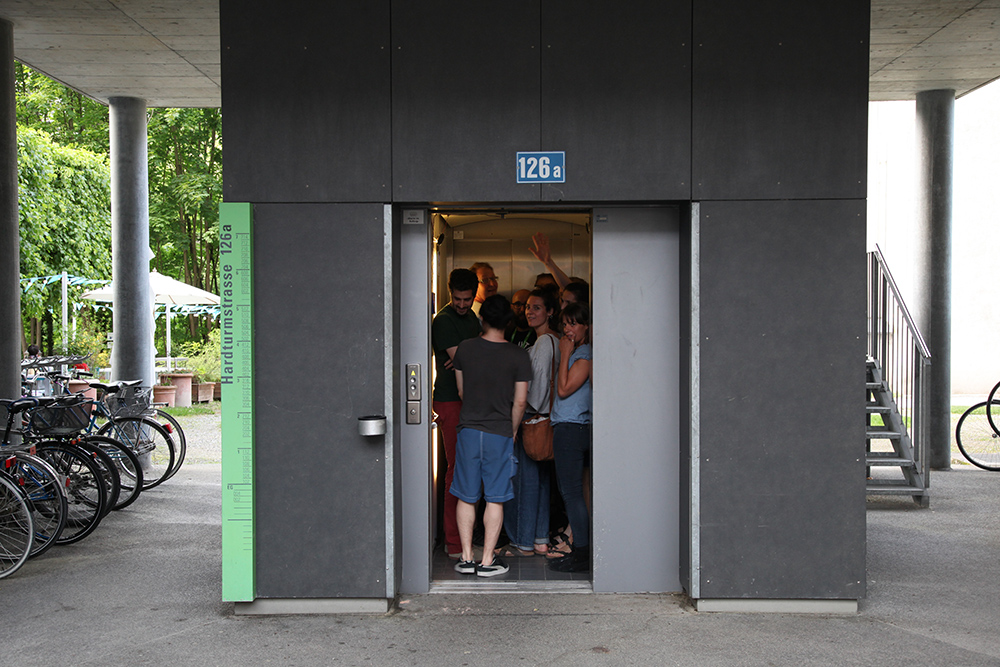 You walk through the parc taking the same way you always do.

Going to work? Going for a walk in the park? Or just wondering in the city ? When you pass in front of “The Tree of Randomness”, you will get suggestions to change your daily routine…

When “The Tree of Randomness” detects the presence of a human it will shake a box containing 3 dices.

Arranged together this random combination of tree dices will suggest for you to find an object (white dice) during a certain number of minutes (orange dice) in a certain direction (black dice). 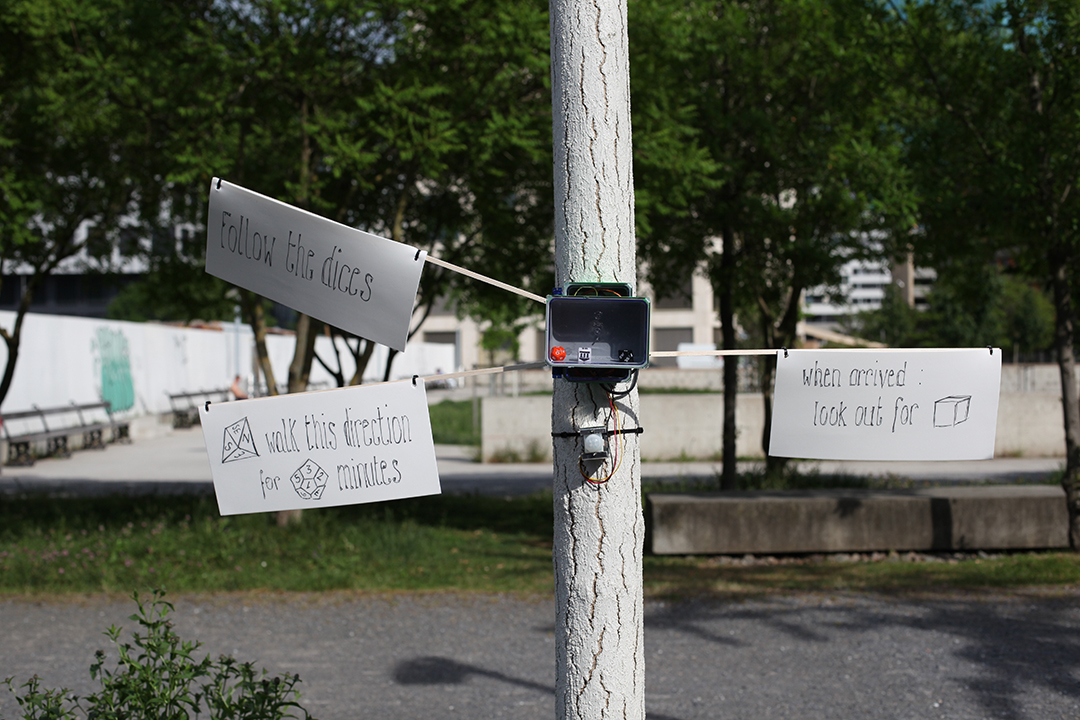 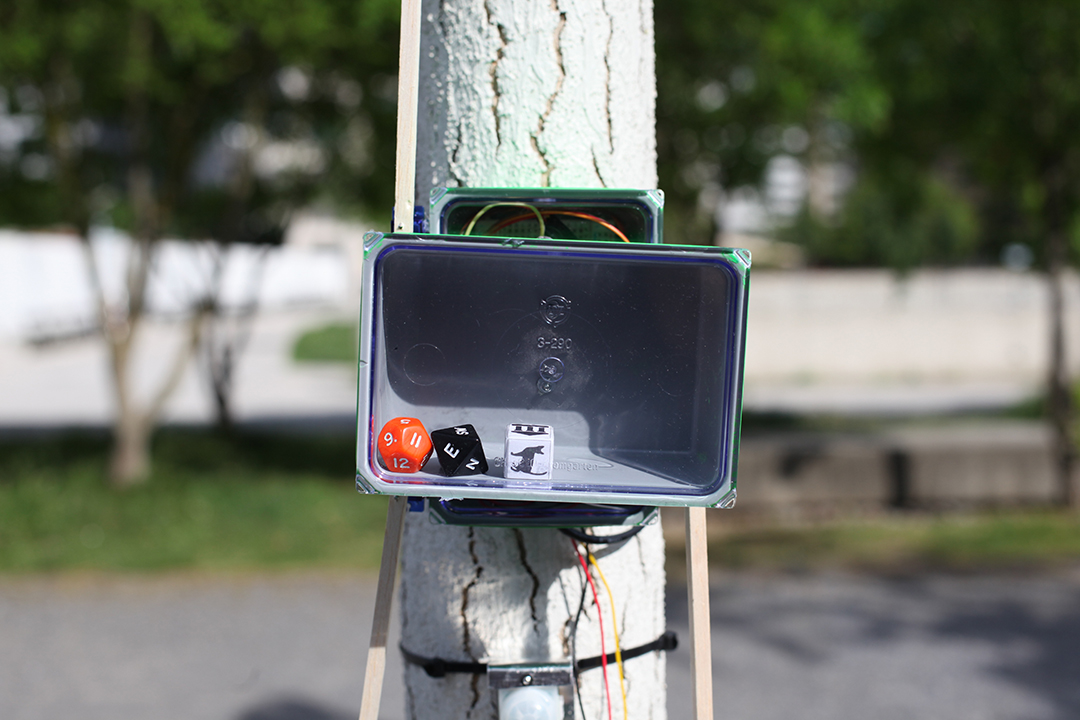 A red button in an empty abandoned space. What does it do? Show the way to randomness. Maybe more?

“Red interference” is the trickster of this workshop: this connected device is taking the form of a big red button similar to the one used to stop industrial machines when it fails. When triggered, it randomly chooses - with an algorithm - one of the other 4 projects of the workshop and brings digital interference to it. Simultaneously, a motorized red arrow will be physically pointing at the chosen project, inviting the curious passersby to walk in the direction shown.

With the rise of “AI” and the wide implementation of sensors, tasks in cities are being more and more automated. Could this red button symbolically remain one of the last physical objects which humans could press to stop the fury of the smart city? 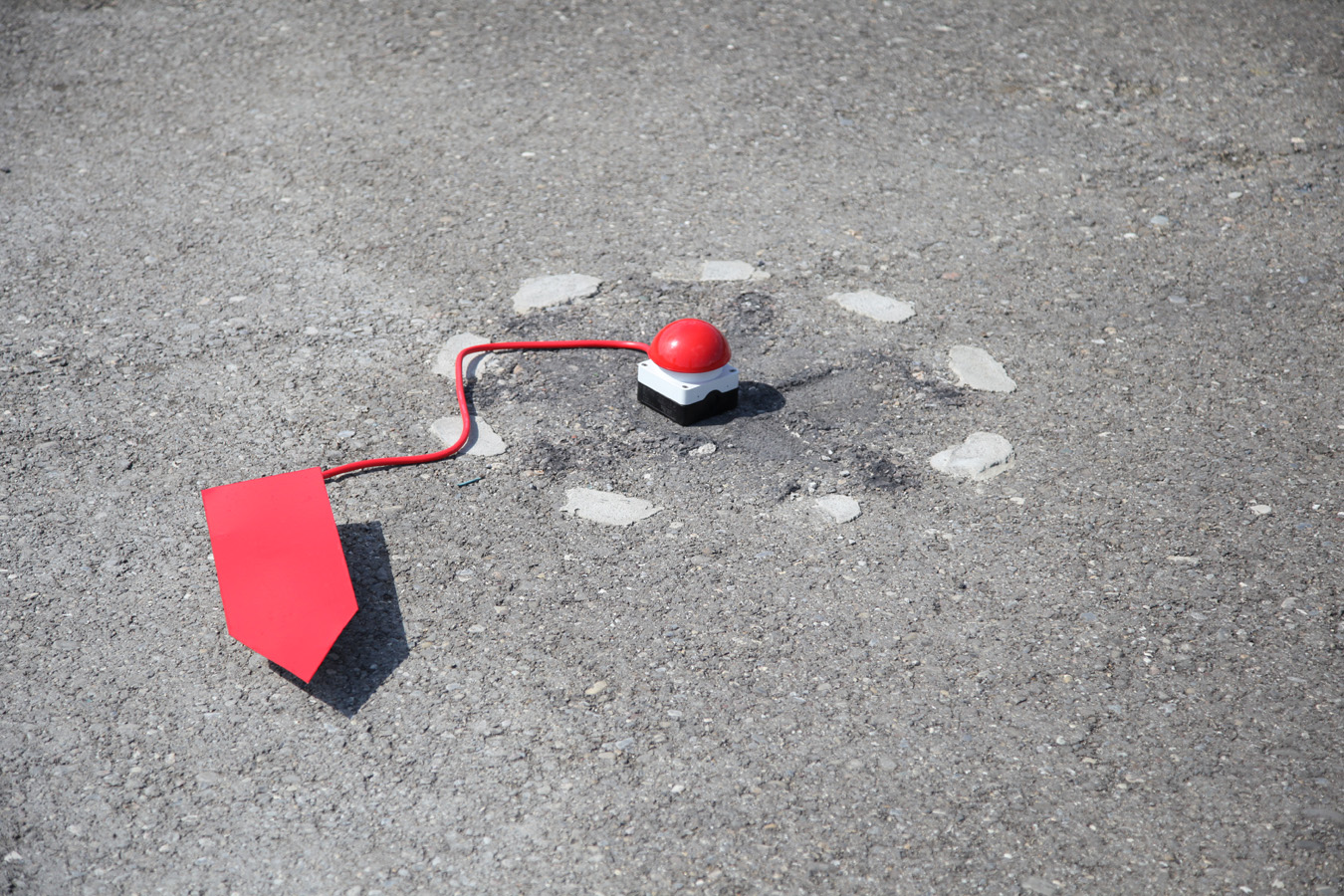 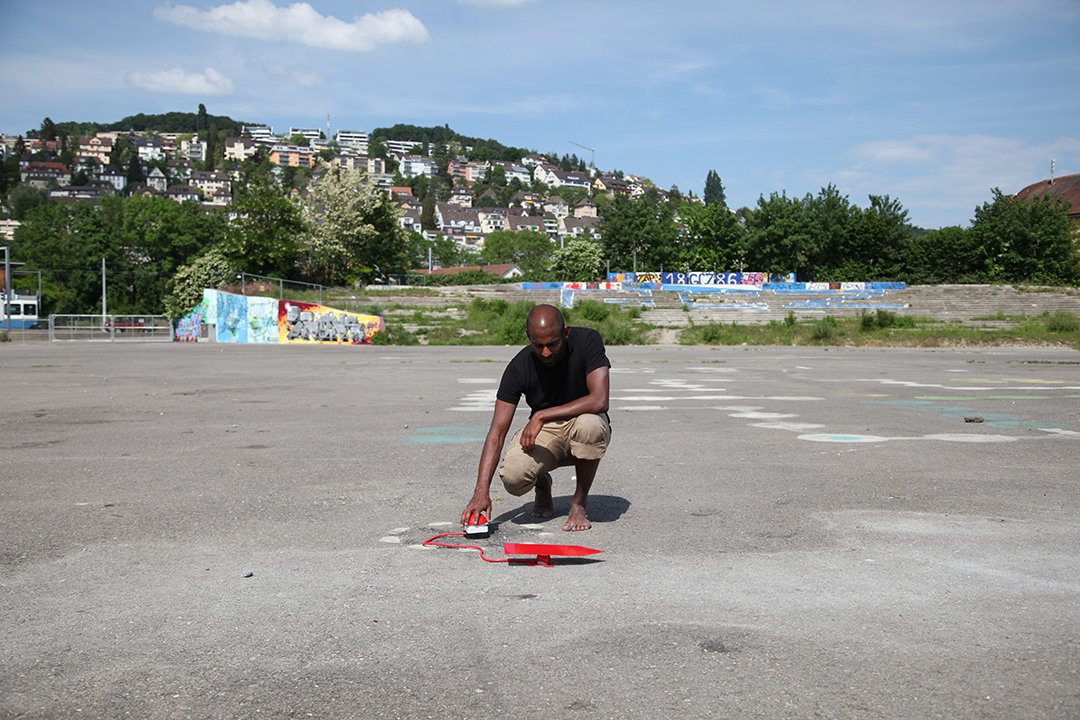 No light will shine upon you

The solution for light pollution using overpopulation: a motion sensor triggers a motor that will hide the light, as soon as you step in it. 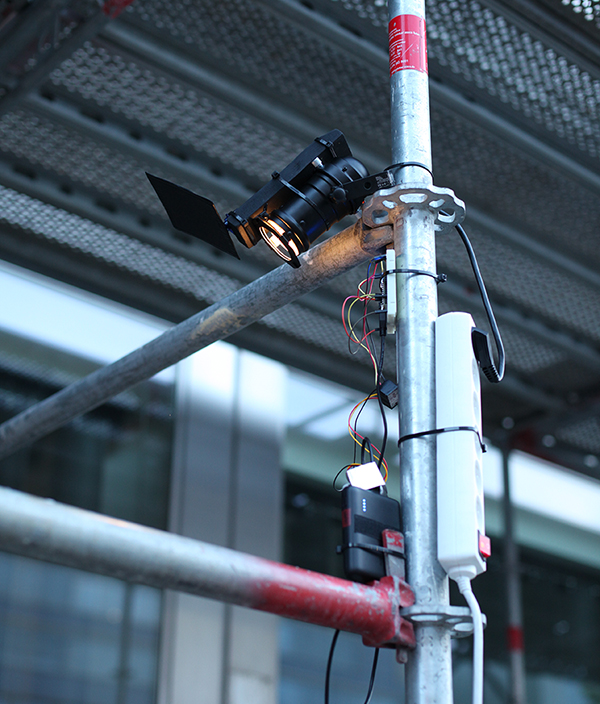